Maine is the oldest state in the nation, and with a generation of Baby Boomers coming into retirement, the state is not getting any younger. It’s for this reason that in 2015, Holbrook at Piper Shores partnered with Maine Medical Center to establish the Piper Shores Geriatric Nursing Scholarship to support the continuing education of nurses dedicated to geriatric care. Only a few years old, the program has supported a total of seven students, four of whom graduated last spring. 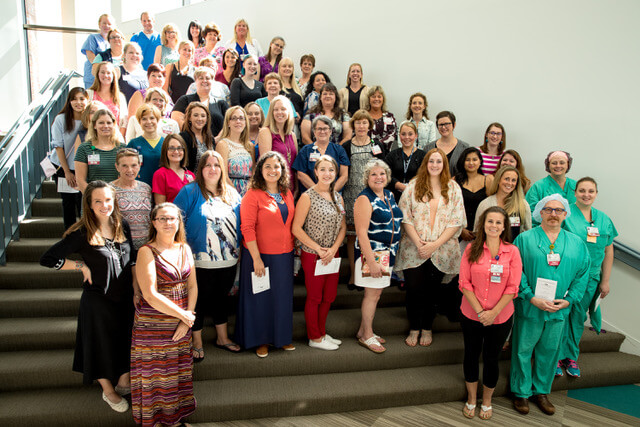 “Not only is Maine the oldest state, but by 2030, we will have the second highest percentage of population aged 65 and older in the United States,” says Christy Gunduz, Senior Leadership Gifts Officer in the Philanthropy Department at Maine Medical Center. “Maine Medical Center knows that to address this rapidly changing landscape, we need to train more nurses, and more doctors, too, for that matter.” To accomplish this, Maine Medical Center recognizes that it must develop a pipeline and remove obstacles for students who are interested in going into nursing.

“Scholarship and tuition reimbursement programs are some of the creative ways we work to help fund the specialized training and continuing education of current Maine Medical Center employees who aspire to be nurses in the future,” says Gunduz.

As an officer in the Philanthropy Department, Gunduz’ role is to explore opportunities for partnership between organizations and the hospital. The relationship between Piper Shores and Maine Medical Center was formed over 16 years ago when Piper Shores was first breaking ground on its retirement community in Scarborough. Over the years, the relationship has grown and there have been dozens of projects, partnerships, and synergistic collaborations between the two organizations.

“More recently, Holbrook at Piper Shores wanted to do something meaningful that catered to their own senior population, and the geriatric nursing scholarship was a perfect fit for their needs,” Gunduz says.

“The Piper Shores Geriatric Nursing Scholarship through Maine Medical Center is a program we are proud to support,” says Andrea Killiard, Piper Shores Marketing and Life Enrichment Director. “If there’s isn’t a shortage of nurses in Maine now, there is certainly predicted to be one in the coming years and decades. The leadership at Piper Shores believes it’s important to support the career track of students who want to get into the field of geriatric nursing because these are the students who will be caring for our nation’s elders, including the residents at Piper Shores. Simply said, Maine Medical Center’s commitment to continuing education for their employees in this area is exemplary.”

Nurses who want to apply for the scholarship must have B or B+ average, fill out an application, and go through a selection process. The fund supports the continuing education of current Maine Medical Center nurses as well as those employees pursuing nursing degrees, associates, bachelors, masters and doctorate degrees. Maine Medical Center partners with a range of schools, including University of Maine, University of New England, and many others.